HUGH THOMPSON, LAWRENCE COLBURN, GLENN ANDREOTTA, US Marines, 1968
On March16, 1968, these three US Marines intervened against their own fellow soldiers in the slaughter that would become know as the My Lai Massacre. Over 400 Vietnamese civilians, men, women and children were killed by the Marines.

Seeing the massacre under way, they set their helicopter down between the advancing US troops and fleeing Vietnamese civilians. They loaded civilians on to the helicopter and flew them to safety.

Rare in the 20th century had soldiers turned away, refused to participate, or actively resist the murder requested of them.

Throughout the 20th Century of Sorrow, millions of civilians have been butchered by soldiers accepting the orders of genocide and torture.

By one simple act done by one person, a tidal wave of change can happen.  In 1955, this African-American woman sat down in a front seat of a public bus in Montgomery, Alabama. In the vile segregation era of America, this was the "Whites only" section. When asked to move and go to the rear of the bus to the "Colored" section, she refused.

A city wide protest ensued over the bus policy.
Then it spread to a state wide protest.
Dr. Martin Luther King jr. became a leader of the protest on radio and television.

The movement became a national protest against racial segregation laws and practices in the USA. The Civil Rights movement can be traced to simple acts of non-violent protest such as this that added together that shown a glaringly bright light on the hypocrisy in the America. 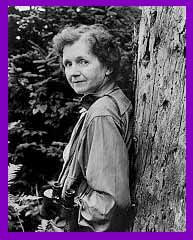 "I have tried to say that all the life of the planet is inter-related, that each species has its own ties to others..."   Ms. Carson, is picked as one of key voices that started the environmental movement.

The author of the1962 book, Silent Spring. One of the first to challenge the unimpeded dumping of pesticides and other environmental pollution.

Chemical interests and corporations tried to censor, block, and deny the findings of her book.

How primitive we are is apparent by the development of environmental science. It wasn't until the late 20th Century, that western science began to accept the interdependent nature of the Earth's ecology.

Western science had no understanding of the relationship of pollution, carbon exhaust, rain forests, wind and ocean currents on our health let alone our weather patterns.

Industry had no restraints on dumping millions of gallons of pollutants throughout the Industrial Age.

And still today, Industry tries to continue to work with and dump toxic chemistry, in its very greedy and short sighted policy of profit over human interests.

Only from the effort of people like Rachel Carson is a knowledge of limits and proper use of our planets resources  becoming  understood.

This has been a human success story that is still unfolding as people from all over the world have worked to sign 100 countries on to the ban.

USA, Russia, China, Cuba, North Korea, Iraq and Iran have not signed the treaty.
More than 400 million landmines have been laid since the beginning of World War 2. The explosives kill or maim 26,000 people a year. Cambodia, Afghanistan, Angola as well as the border between North and South Korea are areas heavily afflicted with this menace.

For once in the midst of economic growth of a country, someone studied the environmental, and personal way products were built. Ralph Nader looked into how the American automotive industry was developing its cars and found them, "Unsafe at any speed".  The powerful industry challenged Mr. Nader but his findings of inattention to safety concerns, pollution, and "built in obsolescence" were correct.

Since then Mr. Nader has continued to be the peoples advocate on a variety of issues the affect the health of the people. He and his consumer advocate groups monitor and evaluate the domestic and foreign policies that affect the jobs and welfare of the population.
As a US presidential candidate, he spoke correctly on how corporations had taken over the US government through vast monetary contributions to candidates of their choice, and the maintaining of extensive lobbying of governmental officials to get favorable legislation that put business needs over the health of people.

The first years of US President George Bush jr. administration with its flagrant support of industry over pollution and environmental controls, and the exposure of the corporate corruption entwined with governmental malfeasance of the Enron, and Global Crossing corporations have proven Mr. Nader correct.

In 2008, the Republican economic corporate agenda was again a complete economic disaster. Vast corporate fraud was perpetrated to the value of Trillions of dollars.

But the corporate control of the American Congress blocked criminal charges against all CEOs, Boards of Directors, and CFOs. Though their fraud was well documented not one was brought to trial and the US taxpayer was forced to pay off the debts and scams of the corporations.

Lehman Brothers, Bears Stern, AIG, Countrywide, Goldman Sachs and a thousand other corporations all perpetrated fraud and all of them got away with it.

Though the United States of America was founded on the right principle that, "We hold these truths to be self evident that all men are created equal", it has taken 200 years to break the practice of slavery and the laws of racial discrimination.

As Dr. Martin Luther King jr. was the vocal and spiritual force of the Civil Rights Movement of the 1950s and 60s, the young attorney Thurgood Marshall was the work horse who brought legal challenges to the policies of racial segregation that existed throughout the USA.

In Brown v. Board of Education Topeka, Kansas 1954, and other cases Thurgood Marshall and his group of  attorneys ended the legal framework that had supported racial discrimination in public activities, political representation and education.

He served as a Supreme Court judge for the USA. In that position he continued to serve the best interests of freedom as stated in the Bill of Rights. 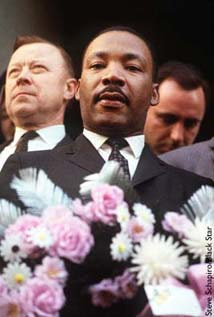 Dr. King was the inspiration and leader of the people of the USA to protest and change the laws of racial discrimination that existed in America. 100 years after the American Civil War officially ended slavery, African Americans were under a net of both overt and covert discrimination.

In public restaurants, public washrooms, public transportation, housing, education every facet of life was segregated. Negroes were limited in there access to public elections by illegal repression like the "poll tax", and lack of voter registration. The police, and secret groups like the Ku Klux Klan enforced the rules of segregation with imprisonment, beatings, and murder.

Finally, from a minor incident in 1955 in Montgomery Alabama when an African-American woman, Rosa Parks, refused to give up her seat in the front "whites only" section of a public bus and move to the rear to the "colored section", a protest throughout the Negro community began.

The voice of that protest and the voice of protest against the whole system of racial repression became Martin Luther King jr., a local minister of Montgomery, Alabama. He modeled his demonstrations on the philosophy of Gandhi's non-violent civil disobedience.

The world  was shocked with news pictures of African-American citizens being beaten by police and attacked by police dogs. This was happening in America, the supposed home of freedom. 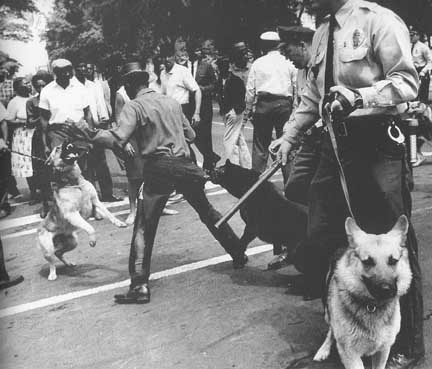 In powerful, beautiful speeches, Dr. King pointed out the hypocrisy of discrimination, inspired the protestors, and galvanized the hearts of those who know that the American Bill of Rights is freedom for all people. "We hold these Truths to be self-evident. That all men are created equal."